Warehouse in SAP S/4 HANA – more options than you think

Classic warehouse in SAP or EWM?


Article published in the magazine: Better Business
Among companies planning to implement or migrate to SAP S/4HANA, the belief persists that EWM is the only option for warehouse management in S/4. This is often an argument for delaying this - already complex - transformational project. Completely unnecessarily, because in the SAP S//4HANA 2020 system, there are also other warehouse management models available, including the good old LE-WM module, but under a new name: Stock Room Management.

In order to present what Stock Room Management is, it is necessary to go back in time to the publication by SAP of the so-called simplification list for the S/4 HANA 1610 system – the first version of the S/4HANA system, containing the so-called simplified logistics. The list contained a very laconic message that the LE-WM module (a module used for warehouse management, part of SAP ECC 6.0 and earlier systems) was not part of the target architecture of SAP S/4HANA systems and that a functional replacement, the EWM module, was available. The list additionally contained information that customers currently using the LE-WM module should plan the EWM module implementation project. Naturally, to meet the needs of customers who intended to implement SAP S/4HANA system by means of SAP ECC 6.0 conversion (so-called brownfield), SAP ensured the possibility of using implemented functionalities of LE-WM module within the so-called compatibility scope. With the reservation, however, that the cut-off date to benefit from the package is the end of 2025.

For thousands of customers who, over the years, implemented the LE-WM module in SAP ECC 6.0 (and earlier) and customized it to their own needs (often these were large customization projects, integrating SAP with other applications supporting logistics functions, e.g. for non-standard mobile transactions), this perspective was at least disturbing. Fortunately, the situation has changed. SAP has abandoned (in part – more on that later) its plan to eliminate the LE-WM module from the SAP S/4 HANA target system architecture. This is how Stock Room Management was created. The classic LE-WM module has simply been given a new marketing name.

What is noteworthy is that the simplification list for SAP S/4HANA 2020 no longer mentions that LE-WM is not part of the target architecture for SAP S/4HANA systems! So the classic LE-WM module stays in S/4HANA for longer, and the upcoming 2025 perspective does not have to worry IT managers and logistics chiefs.

Stock Room Management is simply LE-WM, however truncated from the following functionality:

These functionalities are relatively rarely implemented (at least on the Polish market). So, customers trying to convert SAP ECC 6.0 to S/4HANA 2020 (and soon 2021) need to pay attention to whether they are using the functionality in the list above. If so, they will of course still be able to use them after the conversion, but only for the compatibility package, so only until the end of 2025. After that date, use of LE-WM will be license compliant for Stock Room Management only.

In note 2882809, SAP provides the STOCKROOM_COMPLIANCE_CHECK program that can be installed on SAP ECC 6.0. The program verifies LE-WM compliance with the Stock Room Management scope.

Customers who use at least one LE-WM functionality removed from Stock Room Management have no choice: they must either undertake an EWM module implementation project that will take over the processes performed by the removed functionality (the project should be completed by the end of 2025), or they will be forced to stop using it (the compatibility package will expire).

Since Stock Room Management is part of the S/4HANA architecture (and will be available after 2025 and beyond), the question arises whether for new customers (or new S/4HANA implementations from scratch, the so-called greenfield) it is possible to implement Stock Room Management instead of Extended Warehouse Management? The answer – at least formally – is yes – you can. There are no licensing contraindications, but it is SAP’s official position that the functionality stays with S/4HANA in the long term.

Nevertheless, the following facts should be kept in mind:

EWM is an advanced module for comprehensive warehouse management. It supports the flow of materials within the warehouse and stores information about the stock with accuracy to a specific storage location. It supports such key processes as unloading, putting away, picking, packing and inventorying. EWM can be used to operate simple warehouses as well as the most advanced ones, both in terms of logical organization and implemented automation. In addition to the basic processes listed above, EWM can also be used to handle more complex processes, such as, for example, Yard Management. Of course, EWM also supports operation with RF mobile devices.

For customers who own or implement automated warehouses, EWM offers two options for communication with warehouse automation systems. The MFS (Material Flow System) sub-module allows direct communication with Programmable Logic Controllers via TCP/IP. Then EWM takes over the role of WCU (Warehouse Control Unit). The second option allows you to use IDOC messages to exchange data with an external WCU subsystem (automatic storage treated as a black box). 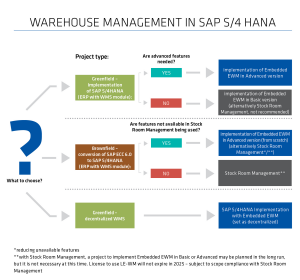 Historically, the EWM module was part of a separate SAP SCM (Supply Chain Management) system, such as the APO (Advanced Planner & Optimizer) module. In SAP S/4HANA EWM has been fully integrated and is available as one of the deployable modules. The version of EWM integrated into SAP S/4HANA is referred to as Embedded Extended Warehouse Management (Embedded EWM). EWM standalone version is still available (EWM 9.5). There are slight differences between the two versions.

At the same time, they are not different versions in the technical sense, but two licensing models. The Basic Embedded EWM version does not require additional licenses (it is included in the S/4HANA standard licenses). The Advanced Embedded EWM version is additionally licensed The license version is set in the system at the warehouse number level (the basic organizational unit in EWM). Both versions differ in the scope of functionalities available for use (SAP reserves the right to audit the system for the functionalities used). The list of available Embedded EWM functionalities in the context of the license is presented in the table below. 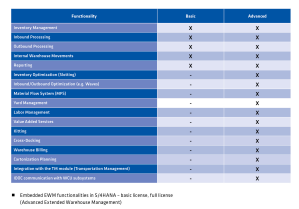 The Basic version roughly corresponds to the scope of functionality of the classic LE-WM module known from SAP ECC 6.0 (and earlier) systems. This version has been developed as a replacement for the LE-WM module for those customers who do not need the advanced features of Embedded EWM but who want to upgrade to a newer technological solution. Thus, for all new SAP S/4HANA implementations it is recommended to implement Embedded EWM and not the Stock Room Management described earlier, at least as far as the Basic version, which performs the most important warehouse processes, is concerned. The full version of Embedded EWM should only be used by customers who require advanced functionality that is not allowed in the Basic version, e.g. large logistics operators (3PL/4PL) or retail chains with large distribution centers.

There is one more way to implement Embedded EWM in S/4HANA that should not be forgotten. The SAP S/4HANA system with Embedded EWM can be implemented as a decentralized WMS system, i.e. a system intended solely for warehouse management (independent of the ERP system supporting the main business processes: sales, purchases, finances). Decentralized systems are implemented mainly with efficiency in mind, so that the handling of warehouse processes is as efficient as possible.

At this point, the author would like to point out that the decentralized version of LE-WM has been excluded from the scope of Stock Room Management. Therefore, all systems currently supporting warehouses in the decentralized model using the LE-WM module should be implemented from scratch as SAP S/4HANA with Embedded EWM set as a decentralized WMS system (the brownfield scenario for this type of projects does not make sense).